Carlo Ratti (MIT Senseable Cities Lab) : "We do not want a city that runs like clockwork, but one that includes citizen input"

Founder of the MIT Senseable City Lab in 2000, architect-engineer Carlo Ratti pioneered the use of data to make cities more fluid. For example, the use of bicycle wheels to collect data in Copenhagen, the electronic tracing of waste in Singapore, and the analysis of 150 million taxi trips in New York, which led to creation of Uber Pool. Based in Turin, the Carlo Ratti Associati agency designs solutions to implement these applications, and recently worked on the Paris ring road.

Carlo Ratti : I would define Senseable cities as going one step further than smart cities, as the former offer a shift in focus–from technology per se to how the latter can be put to use in order to anticipate and fulfill people’s needs. When we refer to Senseable cities, we’re not just talking about urban spaces that are engineered to maximize efficiency, but we bring social considerations into the equation. Senseable cities are more responsive and better equipped to address some of the key challenges we’re faced with–such as urban cohesion and climate change.

Tech and data are the fuel for optimizing and transforming a city. How shall one produce and structure a data with the right long lasting technology, with ethics and with a good environmental impact?

CR : I believe that by adopting a human-focused approach, we could design a city that works for both people and the environment–and that’s run efficiently. It’s in our interest to live in cities that are sustainable, resilient and that can interpret and respond to our needs.

New developments in AI, such as pervasive sensors–or what some people call “smart dust”–allow us to interact with buildings, urban spaces and institutions in unprecedented ways. Of course, we should also have conversations about how all this data is going to be managed and by who, and we should open bottom-up feedback channels that allow city dwellers to actively participate in shaping the city.

One the first obstacles to innovation in occidental cities is probably the complexity of governance. What is your idea of the ideal legal and political level / framework to succeed in innovation? Do you believe in collective intelligence to solve all collective topics? Is it only possible to innovate in non-political structures?

CR : I think innovation is the result of different voices coming together and creating something new through mutual feedback, so I imagine this process as a collaborative effort. Citizens should become active participants in shaping the urban space and governments should develop mechanisms to receive and act on people’s input. We should promote and speed up feedback loops at all levels.

Another obstacle is the tension between the long-term to build a consensus with stakeholders and the speed of technology. According to you what would be the best method for, let's say, a mayor to deal with it and take a real advantage of tech to transform its territory? How should he proceed, with which mindset? What are the best triggers to transform? What could be the relevant KPIs?

CR : I think it’s all a matter of setting out the right priorities: more than cities that run like clockwork, we need to include citizen input. Also, every city is different, so a solution developed in Amsterdam cannot be easy replicated to Cape Town or Rio de Janeiro, to mention some of the cities we have been working with.

KPIs should deal with people’s satisfaction–or even happiness. In this sense, data is opening new perspectives. For example, new digital tools are emerging to measure human connections and spatial behavior in the workplace, and how these relate to productivity and creativity.

For now, this has been achieved through a mix of real-time data analytics paired with digitally integrated furniture and buildings, but one day we could scale up to cities. Imagine what would happen if this were to grow from micro to macro–from the confined space of the workplace to the city at large.

Is there / should there be a specific European pattern for innovative cities? What are the specificities vs Asiatic or US model?

CR : As we were saying, I believe that every city faces its own unique set of challenges, and innovation arises precisely out of this. This means that no solution will follow a one-size-fits-all model, as priorities vary greatly across geographies. Yet, while being hyperlocal, some of this experimentation will likely inspire new initiatives elsewhere in the world.

I like the following sentence I heard from an Athens city official once: “We’re not discussing hyperloops or drones or even electric cars, which are good for other cities but not for Athens. If you have a lot of unemployed people, hyperloop is not something that’s going to solve their problems.” I see this as a very “senseable” approach that could lead to develop innovative, locally-inflected solutions–from the bottom up.

You recently cosigned a collective text proposing a new deal for urban highways and especially the peripheric in Paris. More globally what is your analysis of the Paris mobility policy? Is mobility the first priority within the next years and what is your vision of a good mobility policy in historic cities?

CR : With the advent of electric vehicles and micro-mobility devices such as electric scooters, mobility is destined to evolve rapidly over the next few years. In Paris, we proposed a New Deal to reimagine the purpose of traffic arteries for the modern age–such as the Boulevard Périphérique, which has traditionally enclosed the city center and created a starkly defined periphery.

In this instance I focused on Paris, but it’s a broader conversation: as smarter means of transportation and real-time data allow us to manage traffic more efficiently, the number of cars circulating around cities will likely decrease, and roads could be reimagined as multi-purpose spaces. They could include gardens, orchards, playgrounds, and they could be deconstructed in ways that make them reconfigurable throughout the day. For historic cities, which are usually densely populated, this could mean more space for people, easier access to nature and cleaner air.

Paris ring road in 2050 according to CRA
(Carlo Ratti Associati)

What will urban highways look like in 2050? Last June, during "The Roads of the Future of Greater Paris" exhibition at the Pavillon de l'Arsenal in Paris, Carlo Ratti Associati presented his vision: his hypothesis is that the number of vehicles circulating on the Paris ring road will be halved through the rationalization of intramural traffic and new mobility. 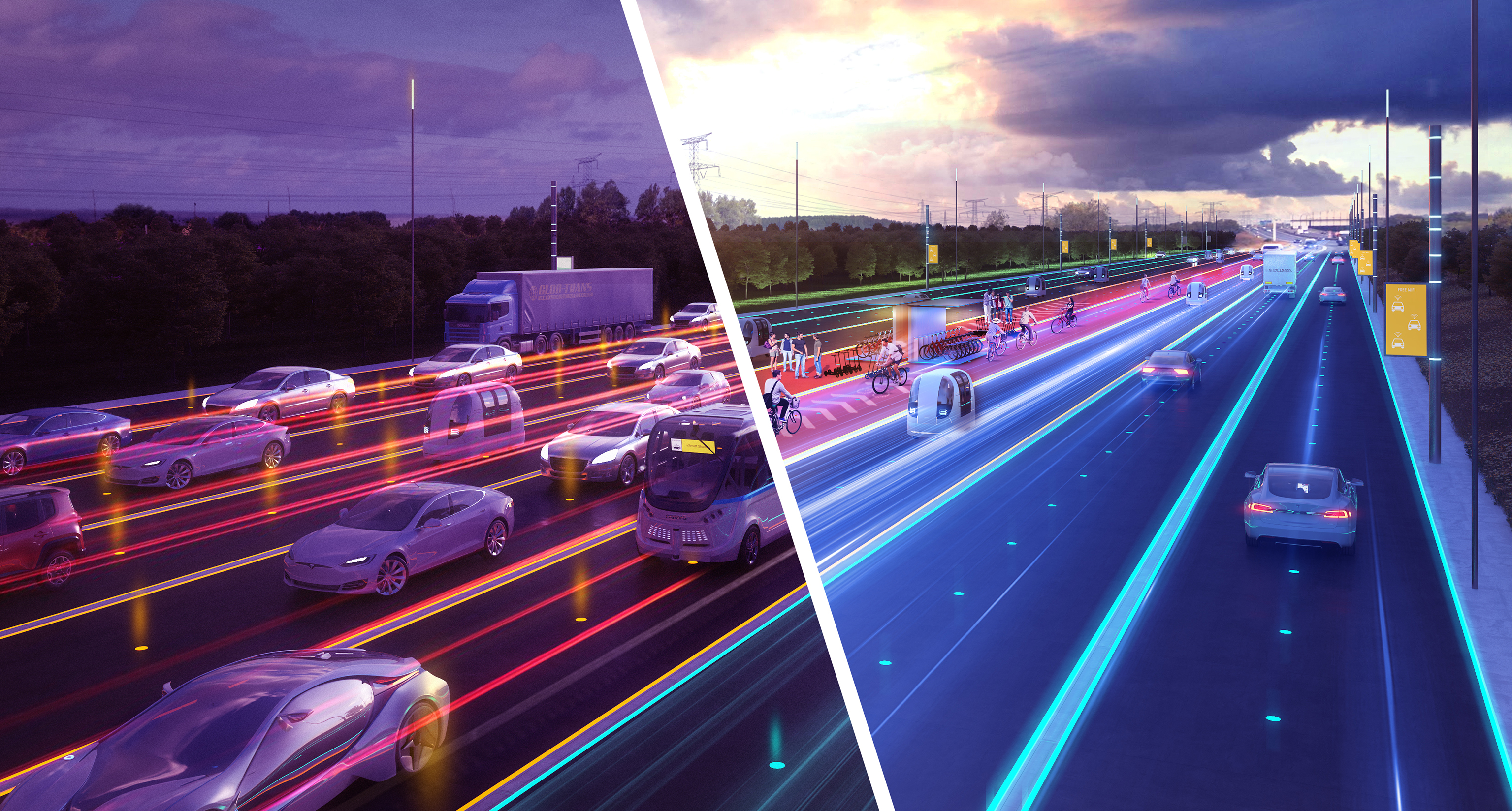 On this basis, the team of researchers, architects, landscapers and industrialists (including Vinci Groupe) imagined a revegetation of the 35 km of free lanes, and a conversion of some of the surface into playgrounds. 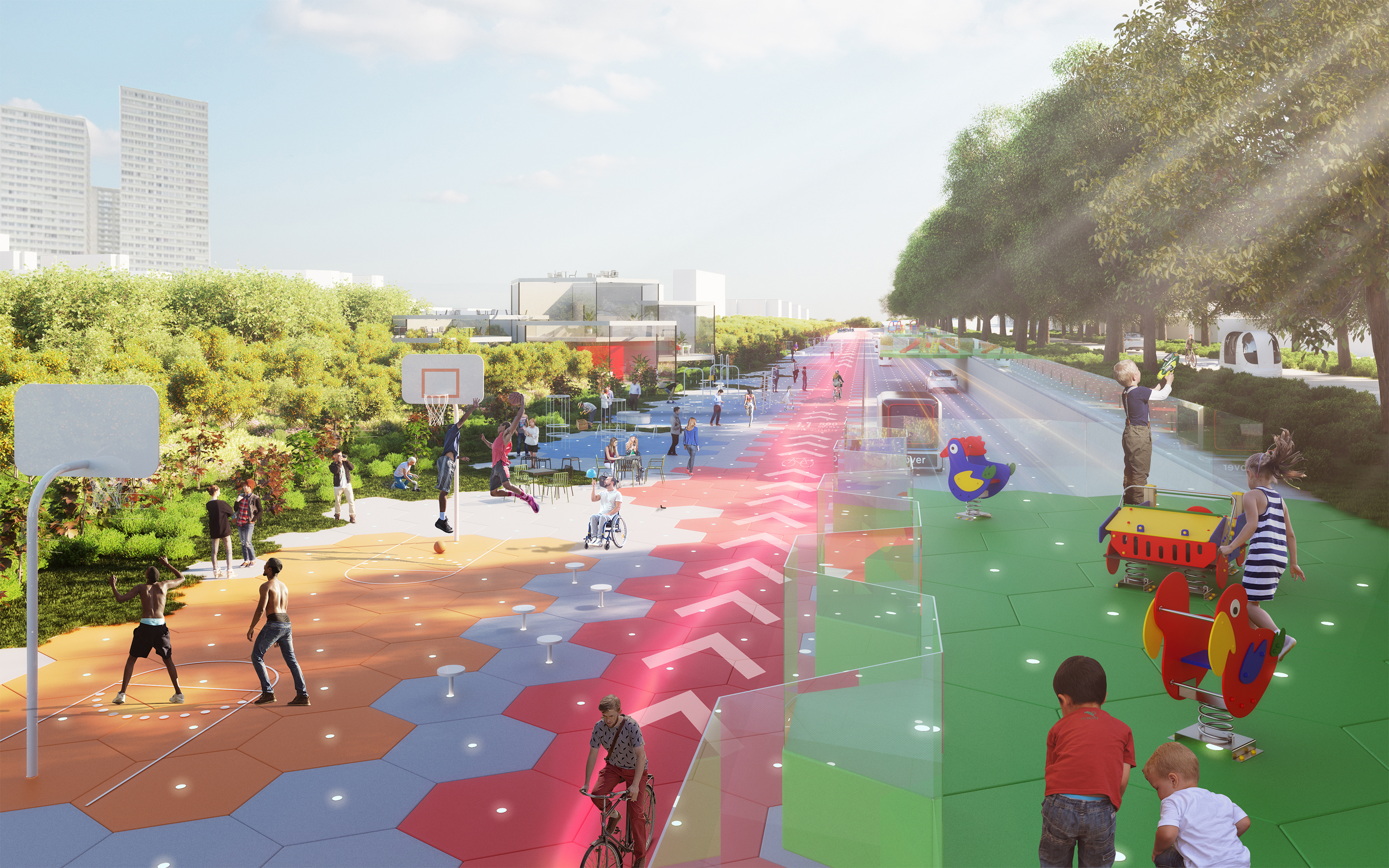 Interconnection with public transport is also made in this free space. 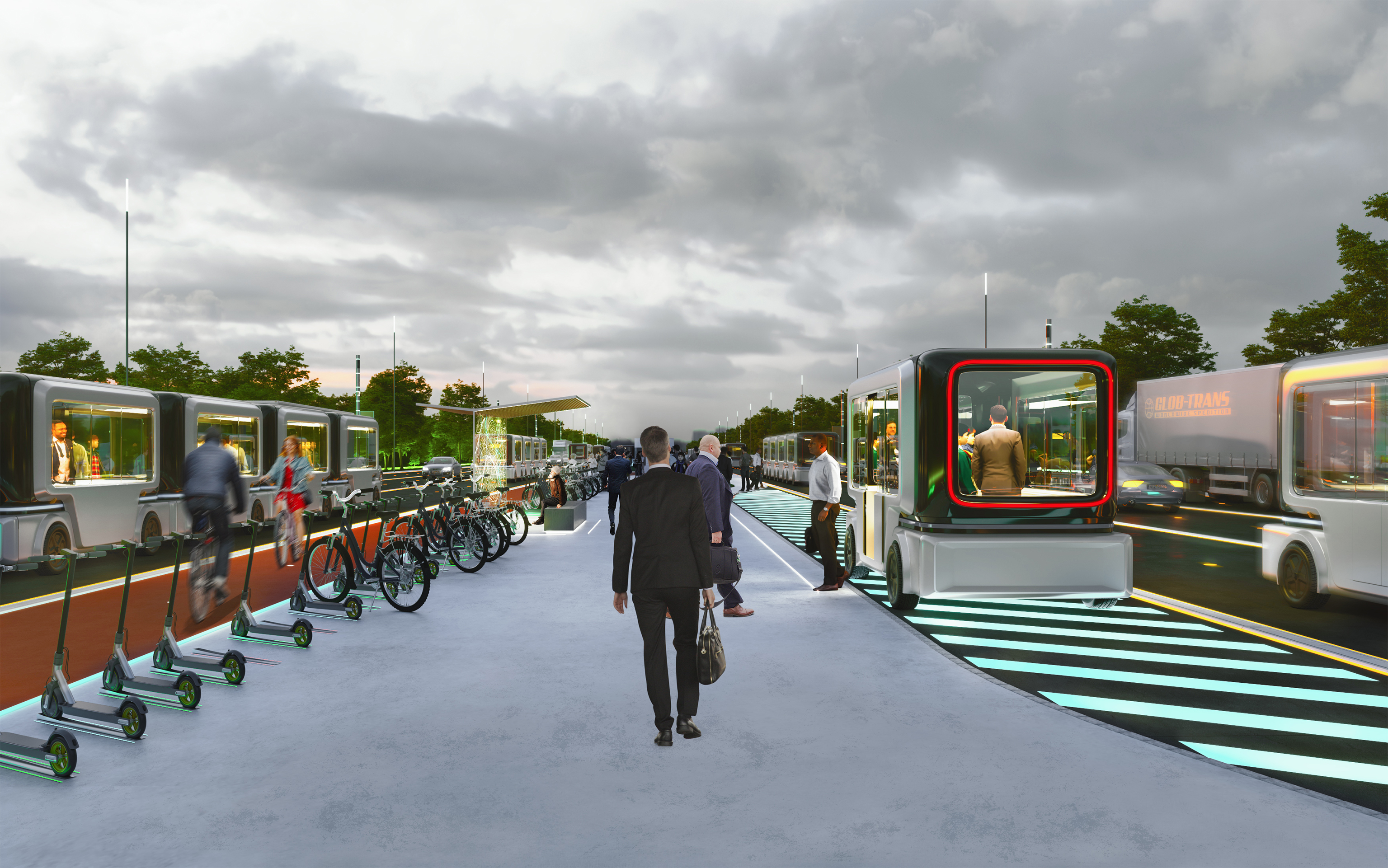 Buildings are built over roads to reduce the gap between Paris and the suburbs.